From miniature keychain attachments to heavy-duty tactical gear, you can get flashlights in a number of forms. And this is an essential tool since the bigger and brighter light you have, the visibility you will have in pitch-black darkness. However, the luminosity varies and so does the ability of your eyes to adjust to it. If you’ve ever had someone point a flashlight directly at you, you know how difficult it is on your eyes. But, the question is: can a flashlight blind you?

No, a flashlight cannot make you permanently blind.

More powerful and intense flashlights can only lead to temporary blindness, but it won’t lead to anything serious.

So far, no one has invented or built a flashlight that can fry your eyes like a sunny-side-up egg.

Nevertheless, flashlights are an artificial light source, and they do have the potency to affect your eyes in certain ways.

Still, there are some other worrisome aspects related to this matter.

Up next, we’ll walk you through the ways flashlight affects your eyesight!

Why Does a Flashlight Not Blind You?

Because flashlights don’t deliver an intense source of light that can damage your vision.

The tendency of a flashlight to harm your eyes depends on the energy per unit area.

Or in simpler terms, the more intense a light source is, the more likely it is to affect your eyes.

On the other end of the spectrum, we have light sources such as studio lights, stadium lights, as well as tactical gear flashlights.

These lights are capable of potentially rendering significant eye damage.

They can burn holes through your retina if shone directly in your eyes, but they’re not powerful enough to lead to any lasting blindness.

How Does a Flashlight Affect Your Eyes?

A flashlight can commonly affect your eyes in several ways ranging from temporary dizziness to a permanently weakened eyesight (not blindless though).

However – the extent to which a flashlight can impair your vision depends on the component wavelength of the light.

The intensity, color and duration of exposure change how actively your eyes can or cannot adjust to it.

Flashlights found in smartphones or the small handheld flashlights generally do not induce any negative long-lasting effects.

But if you receive chronic exposure to a flashlight, over time your vision may begin to suffer.

As for the bigger, brighter flashlights, the effects can definitely differ.

You know how difficult it can be to look directly at the sun at noon time, right?

Well, looking at a large and bright flashlight is quite identical in terms of how it feels.

They may wipe out your usable field of vision and distort the regular functioning of your optical nerves.

In fact, a brighter laser light without a UV component doesn’t have the potential to do any damage.

So yeah, your eyes aren’t always in danger of frying to a crisp when there are flashlights in the vicinity.

How Harsh Can a Flashlight Be for Your Eyesight?

Typically, a flashlight can’t put too much strain on your eyes, although the more powerful, high-luminosity models can lead to some short-term discomfort.

But don’t forget that the luminosity of every flashlight is different.

For instance, if you’re looking for a key underneath your bed, a tiny handheld one will suffice.

But if you’re out in the woods for a night stay, you’ll need a heavy-duty rescue light for the best results.

The difference between the two is about their luminosity and the corresponding range of visibility.

As a general rule of thumb – any flashlight that strains your eyes is bound to have some unpleasant effect.

Here are the common luminosity ranges that you can find with flashlights:

This amount of light is powerful enough to make a piece of paper readable.

This luminosity range is perfect for lighting up rooms, but it’s useless for outdoor uses.

Flashlights that fall in this range are ideal for outdoor usage.

100+lumens are also enough to dazzle one’s field of vision if shone directly at the eyes.

This amount of lumens is perfect for lighting up large rooms and halls.

However, the closer you get to 300, the higher the chance of getting an impaired vision.

These are generally used as stadium lights. Flashlights ranging between 300-699 Lumens are enough for bathing a football stadium in light.

Anything beyond 700 lumens is considered extremely powerful as it can supply enough light for two or three football stadiums.

Right now, there are even flashlights that have a luminosity of approximately 100,00 Lumens.

However, these aren’t meant for ordinary purchase and use. Keep an Eye Out for the Wavelength of the Light!

Once we’ve gained an understanding of the different luminosities, we may see the effects of the light’s components.

This essentially refers to the component wavelength of the light.

The shorter the wavelength, the more energy it is bound to possess.

This means that the visible white light, which is a combination of all other light wavelengths, is potentially harmless.

However, if there is red or blue light in a substantial amount, it means that the flashlight may be more harmful.

Red and blue light rays have some of the shortest wavelengths in the spectrum.

Their energy, inversely proportional to the wavelength, is quite overwhelming for a naked human eye.

This is why flashlights with blue and red tints may be especially dangerous for unguarded eyes.

The longer they’re exposed to this amount of energy, the more the cornea and retina will suffer.

This might even make you feel dizzy in the head because your eyes and brain are directly connected via optical fibers. The Influence of Flashlight on Your Eye Color

When discussing color components, flashlights aren’t our only center of attention.

Human eyes themselves have numerous color ranges, as you’re definitely already familiar with!

Whether your eyes are aqua blue or soft, honey brown, it makes a difference in how your eyes handle the temporary flash blindness.

You see, the moment your eyes are hit with the direct, intense beam of light, the retina experiences a temporary color bleaching.

The lighter color of eyes means that they’re rather easy to bleach.

But don’t fret – this is only a temporary phenomenon, and then your retinal pigment readjusts itself.

In this regard, darker colored eyes, especially dark brown, grey and black provide an advantage in this case.

Just like black objects, dark-colored eyes can absorb and neutralize much of the light coming to them.

As a result, they take longer to bleach as a result of receiving an intense beam of light.

They can tolerate a more powerful light source for a longer duration.

Hence people with darker eyes are less likely to suffer from flashlight beams.

How to Avoid Eye Damage From Flashlights?

Even though blindness isn’t possible with flashlights, we still need to avoid negligence when it comes to their use.

And there are a few ways to avoid eyesight damage from flashlights and some ways to cure any damage caused as well!

Eyesight damage is a very serious condition that should never be neglected and here are some possible treatment options:

These methods are commonly employed to treat discolored or burned retinas.

But we advise you to not self-diagnose yourself and go to a specialist to receive proper treatment for your specific eye problem.

Is the Temporary Flashlight Blindness Any Good?

Not exactly, although it can be a necessary inconvenience in certain situations e.g. survival.

For the innovative minds, flashlight blindness isn’t at all that bad.

In fact, sometimes flash blindness is your only ride or die way to escape a sticky situation.

It’s obvious that flashlights are useful for dark areas and they give you a sense of safety and control.

But even more so, these devices can prove to be a pretty clever defense mechanism in emergency situations.

For starters, let’s talk about camping and hiking. Carrying a Powerful (Potentially Blinding) Flashlight can be a Life-Saver!

Depending on the circumstances, you may need something that distracts the wild animals and prevents you from becoming their next meal.

This is where a powerful flashlight with a wide beam comes in to play to help you distract or even startle the approaching danger.

This can give you enough time to spot a hideout and lure the predator away from you.

And the flashlight also has psychological effects on humans.

Since the eyes and brain are so intricately coordinated, shocking, or temporarily blinding someone’s eyes is also an excellent defense trick.

Deliberately aiming the beam straight at another person can cause severe, temporary blindness.

The blindness caused by your flashlight will render their eyesight useless like we already discussed above.

This can lead to confusion and bring down the person’s guard, thus giving you more time to escape.

If you use a flashlight in closed rooms, it can have a strobing effect as well.

In some cases, this will seriously baffle your unwelcomed guest/s.

However, note that strobing can sometimes lead to seizures! 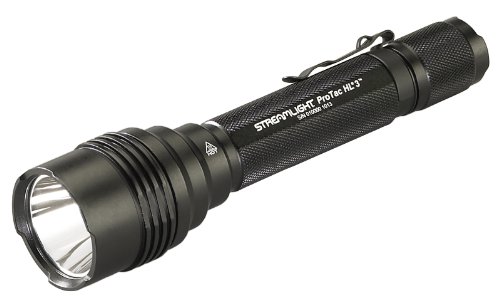 The Caveat: Choose a Flashlight Wisely

Any flashlight, no matter how powerful it is, won’t rob you of your eyesight.

There are, however, severe consequences of long term use and exposure to intense light sources!

These include burnt or discolored retina, a temporary blurred field of vision and even mental issues.

Flashlights with mild light wavelength and intensity are more tolerable and less dangerous in comparison to harsher counterparts.

Professional and heavy-duty flashlights can be pretty tricky to deal with.

Even if you know how to handle one, it’s not easy to use under all circumstances.

Using deflectors, protective glasses, and keeping the beam aimed at lower angles can minimize the chances of temporary flash blindness.

Lastly, temporary blindness from sudden flashlight exposure can be a potential survival trick, used against your assailants.

It can guard you against potential human attackers as well as keep you safe from any animal threats.

Now you know that a flashlight won’t make you blind for the rest of your life.

Only the more powerful models can lead to some temporary issues, but this kind of blindness goes away.

Truth is, a flashlight is an invaluable survival tool that can help you in a plethora of ways, including self-defense.

Now – have you ever experienced temporary blindness from a flashlight directly pointed at your eyes?