Real-life bear encounters might be rare but you don’t want to come face to face with one barehanded. Especially if you like hiking in the wilderness or if you live in a remote area. This is why you should definitely carry an anti-bear spray, just in case. But how does bear spray work?

Using this spray on a bear will irritate its eyes and nose, while also swelling its mucus membranes that lead to shortness of breath and panic.

These effects will most likely make the bear run away, thus giving you precious time to turn around and get out of there!

And while it might sound like animal cruelty to some, remember that a bear spray can be the difference between leaving unscathed or ending up seriously injured and even dead.

What is Bear Spray?

Bear spray is a type of non-lethal deterrent that comes in the form of a spray designed to prevent an aggressive bear from attacking you.

In fact, a bear spray is nothing more than a regular pepper spray but with a weaker formula.

Bears have a sense of smell that’s 2100 times better than that of humans!

Yes, you read that right – regular pepper sprays that are meant to be used against human attackers are typically 2-5 times more potent than their animal equivalent.

Bears just need a much smaller amount of capsaicin than us in order to be incapacitated.

The red pepper extract that a bear spray contains can effectively inflame the eyes and nose of a bear, leading to irritation and shortness of breath.

And this type of self-defense weapons are not meant to kill your target, but to temporarily disable it so that you may escape danger. What is Bear Spray Made of?

The active ingredient found in this oily substance (OC) is capsaicin, which is a chemical compound isolated from chili peppers.

Note that the oil-based chili pepper extract is very sticky and tenacious.

Capsaicin causes a burning sensation when it comes in contact with the skin, while the primary effects of this chemical are pain, redness, swelling, and inflammation.

And this is what happens when oleoresin capsicum ends up on the bear’s face:

And all of this is achieved by only around 1-2% of capsaicin as the main active ingredient in your typical bear spray.

The United States Environmental Protection Agency (EPA) regulates the production of bear sprays and they only allow a maximum of 2% capsicum oleoresins per product.

This is how strong this chemical compound really is – you don’t need much of it to make the bear twink twice before attacking you. 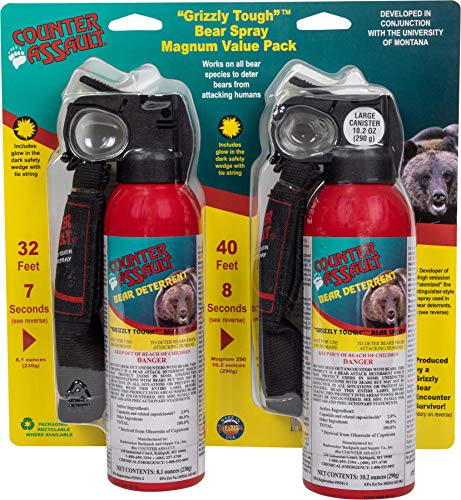 How Does a Bear Spray Work? (Detailed Explanation)

Here’s what happens behind the scenes when you pull the trigger:

Now, as we get into the more technical stuff it’s worth mentioning that there’s a particular gas propellant that’s used in most models on the market.

That’s the R134a gas, which is the propellant that you’d find in your run-of-the-mill asthma inhaler.

This gas propellant is what forms the visible cloud that we call spray when it’s mixed with the capsaicin chemicals.

And the entire reaction between the chemicals and the gas is what helps bear sprays fire the red-hot combo at roughly 75 mph!

Where is Bear Spray Legal?

Bear spray is legal to buy and possess across the United States and most other countries across the world.

However, some particular national parks have strict rules regarding the use of such non-lethal self-defense devices.

Below you’ll find a list of some of the most popular national parks in the US that allow bear sprays on their territory and those that don’t.

But even if you’re in a national park where it’s allowed to have a bear spray with you, always use it for what it’s intended for.

That is, as a self-defense tool to prevent an angry bear from mauling you. 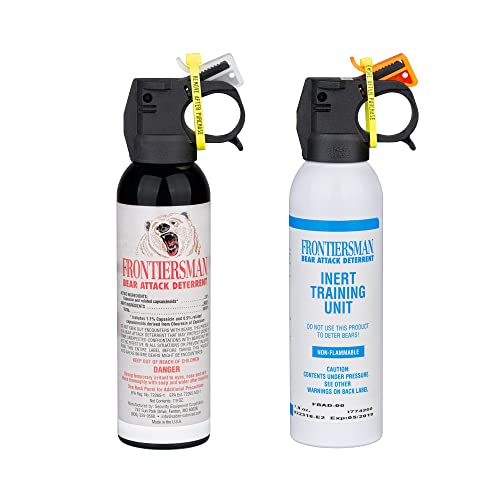 What does bear spray do to humans?

Not much as it’s way weaker in terms of potency than a pepper spray that’s meant to be used against humans.

Contrary to popular belief, a bear spray is roughly 20% weaker than a spray that you might use against muggers.

Still, the expected effects can be identical to what an animal might suffer from, such as:

Can bear spray kill a human though?

No, a bear spray will not kill a human hence why it’s labeled a non-leather weapon.

It’s much weaker than any of those self-defense pepper sprays and it might not even fend off your attacker.

Even pepper spray-related deaths are very rare, although they do exist.

Yes, they’re very effective at stopping an aggressive bear at its tracks.

In fact, research done on the subject shows that a spray is effective in approximately 90% of bear encounters while using firearms resulted in injuries in 50% of cases (1).

Still, don’t forget that guns and rifles are lethal weapons and can be 100% effective at stopping (read killing) a bear if that’s your only option to remain alive.

Sprays, on the other hand, even highly-effective are still affected by outside factors like wind direction, which might lead to a “rather” tricky situation.

How to use a bear spray?

This is how to properly use your bear spray in 5 simple steps:

And don’t forget to stay fully alert as you back away since you can’t be 100% sure that the bear wont’ follow you.

Pro tip: Always keep it within reach (in an external pocket or backpack)

Another important thing to remember is to always use the bear spray for what’s supposed to do i.e. stop an angry bear.

How long do the effects of bear spray last?

Approximately 30-45 minutes after being sprayed.

Of course, this might vary depending on external factors such as wind direction, distance, temperature etc.

Also, applying milk to the sprayed area can help to break down the oleoresin capsicum oils, thus reducing the potency and duration of the effects. Even staying near the area that’s been sprayed means that you’ll still be able to smell the very sharp and biting smell of a bear spray.

Still, it’s not as bad as the smell of pepper sprays, which is even stronger and sharper.

You can now feel that much safer during your next adventures in the wilderness as you know how a bear spray works.

But before you go right ahead and buy one, make sure that the park or place that you’re going to allows the use of such weapons.

Have you ever used a bear spray before and how was it?

And if not, do you consider getting one just to err on the side of caution when hiking in the wilderness?

Go on, leave your answer below!