Hm… merely kids’ toys or deadly tools? Slingshots have definitely gone a long way from traditional to more modern design. From the „Y“-shaped tree branch and elastic rubber to the „Y“-shaped steel body and high-velocity, high-tension elastic materials. But regardless of design, is slingshot a weapon?

Yes, a slingshot is a viable weapon and there’s no doubt about it.

In fact, it is much more than just a primitive weapon.

Thanks to the numerous technological advancements, slingshots nowadays are surprisingly powerful and some of them boast force almost equal to that of handguns.

You can a slingshot to hunt small game (birds, rabbits, squirrels) or defend your home from intruders (note that it can cause serious injuries to humans).

So – why would you risk running out of ammo in a dangerous situation when you can use this tactical, hand-powered weapon for self-defense?

Seriously, if used properly, a slingshot can literally save your life!

Contents hide
1 Where Does the Slingshot Originate From?
2 Modern History of a Slingshot
3 What are the Different Types of Slingshots?
3.1 1. Traditional
3.2 2. Wrist Supported
3.3 3. Slingshot Bow
4 Slingshot vs Handgun
5 Are Slingshots Legal?
6 Conclusion

Where Does the Slingshot Originate From?

The first record of someone using a slingshot in history is King David who used an ancient version of a slingshot to kill the giant Goliath as evident from 1 Samuel 17 from the Bible.

It consisted of a rope/leather and a pouch, in which a stone was placed.

Back then the slingshot was a bit difficult to use as a rope/leather as it couldn’t provide high velocity, but it was nonetheless one of the most powerful weapons of that time.

Other, secular narratives claim that the Russians invented the slingshot or also known as„rogatka“.

It was a mini version of another ancient Russian weapon – „rogatina“ which was a type of spear.

Modern History of a Slingshot

Wham-O came up with the first commercial version of a slingshot back in 1948, while Saunders Archery Co. produced its first modern variant (also known as the Wrist-Rocket) in 1954.

A few years later, slingshots came with surgical rubber tubing and wrist braces, which made their use more convenient and comfortable.

On the other hand, Mexican guerrilla forces have used slingshots as weapons to disable street lights and for self-defense.

What are the Different Types of Slingshots?

Despite the many variations, there are 3 primary slingshot types that you can come across: 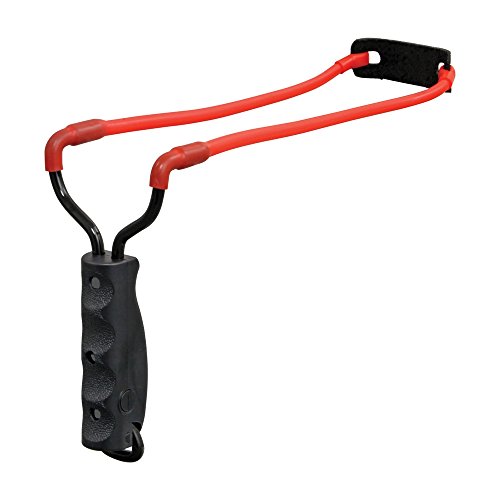 The traditional slingshot is the one you used to play around with when you were a kid.

It has a Y-shape and it’s made of stick or wood, with rubber strips.

Nowadays though, you will rarely see a slingshot that has a wooden frame.

Instead, manufacturers use more durable materials such as steel, cast iron, aluminum, or even metal. 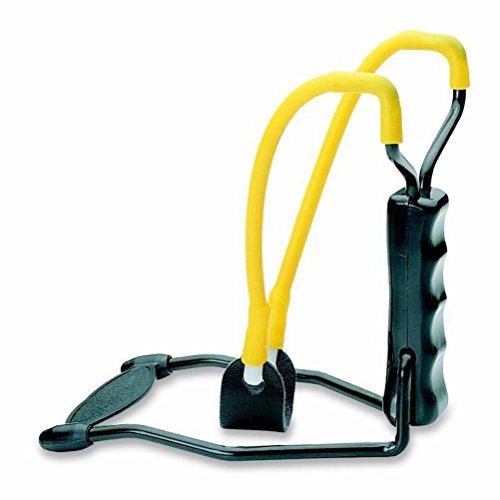 That is due to the surgical tubing that makes shooting more comfortable as it stabilizes the wrist and prevents fatigue.

This is an ideal type if you are looking for an efficient self-defense or hunting weapon that doesn’t require specific ammunition. 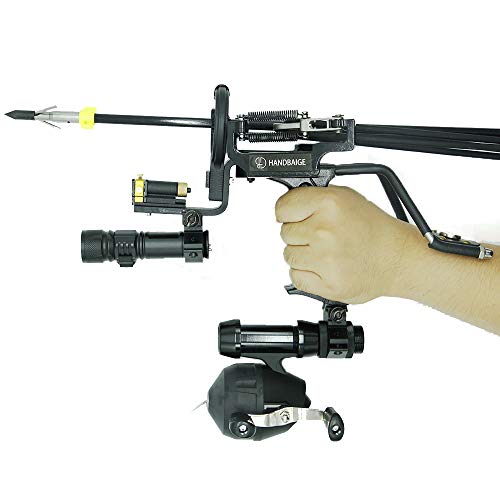 A slingshot bow a.k.a a sling bow is a weapon that combines a typical slingshot with a bow and arrows.

If you are up for a bigger game, then slingshot bows could be the right choice.

This type of slingshot shoots arrows and includes an arrow rest and nock, which, again, makes shooting more accurate and comfier. Modern slingshots feature considerably more power than older, more traditional versions, which puts them in the same rank as some handguns.

Even more astonishingly, some tactical slingshots are even more powerful than handguns!

Some of the more recent tests and data prove that slingshots can outperform the following calibers of handgun ammunition:

However, note that the very powerful .44 Magnum still outperforms even the most modern and sophisticated slingshot, but that’s to be expected. 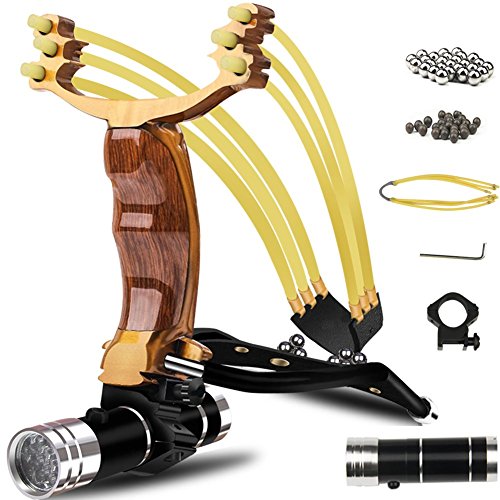 Not all slingshots are legal, although this depends on the state and the type of slingshot that you’re using.

For reference – thirty-two out of fifty states permit hunting with slingshots.

In Florida, you can use slingshots for hunting furbearers and non-game animals but NOT small game.

The following states don’t permit the use of a wrist-rocket slingshot:

Thus, no matter your intention of use, the possession of a wrist-brace slingshot in New York (for example) is a misdemeanor.

And in New Jersey, using any type of slingshot without an explainable reason is considered a felony!

All in all, is slingshot a weapon? Absolutely it is!

It might be your life-saver in case of a civil war or any other apocalyptic scenario.

This extremely effective weapon requires so little effort and comes with endless ammo as you can even use rocks you find on the ground as projectiles.

All of this makes it just perfect for hunting, self-defense or even offense.

Now – when was the last time you picked up a slingshot?

Or have you ever used one before?