There’s hardly a term within the survival and tactical world that raises more eyebrows than “5.11”. Some say it’s something about military equipment, while others claim it’s related to rock climbing. So… what does 5.11 mean after all?

This is where most people get confused because the 5.11 Tactical clothing brand have skyrocketed in popularity.

As a result, most forget about this term’s rock climbing roots since that’s how the legendary 5.11 tactical pants were born – as pants used for rock climbing.

What Does 5.11 Mean in Rock Climbing?

In rock climbing, 5.11 stands for a fairly difficult technical climbing that can be quite dangerous due to its no-hanging-rope nature.

This puts 5.11 as one of the Class 5 (highest difficulty class) sub-classes according to the Yosemite Decimal System (1).

The YDS difficulty system starts from 5.0 and goes all the way up to 5.15d as the higher the number and letter, the harder the climb.

Back in the days, 5.11 was considered the cherry on top when it comes to extremely challenging types of climbing although that’s no longer the case.

Sure, 5.11 is still considered hard due to its vertical and highly technical characteristics and even seasoned climbers will need plenty of practice to best it.

However, as climbers get stronger and have access to better and more advanced gear, the upper limit of climbing threshold slowly increased. This 3-part difficulty rating system that defines how difficult the various climbs, walks and hikes are.

The YDS came out in the 1950s as an upgrade over previous difficulty rating systems originating from the Yosemite Valley in the US, hence the name.

Although it’s mainly used by mountaineers in North America (US and Canada), this system quickly made its way abroad and it’s now a standard used by different climbers across the globe.

Now – the YDS puts every climb or hike into one of the following 5 classes:

And something quite interesting and fascinating is that the hardest climb on the planet (as of 2019) is the Silence climbing route located in Norway with a scary rating of 5.15d. 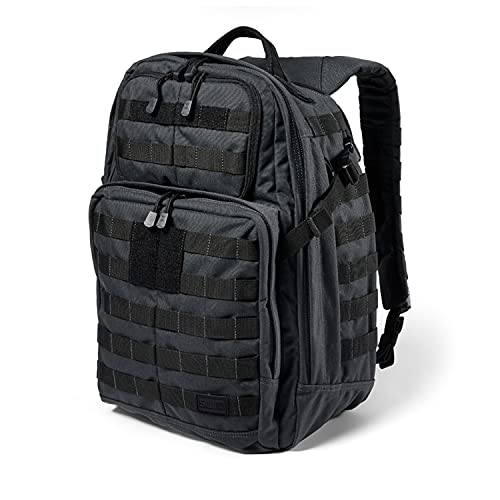 What is the Meaning of 5.11 Tactical?

Their extensive portfolio consists of various tactical, military and survival item such as:

Over the years, the company’s expertise in manufacturing quality tactical apparel has made the term “5.11” synonymous with the name 5.11 Tactical.

But don’t confuse the two terms – 5.11 Tactical is the tactical clothing brand, while 5.11 is simply a rock climbing difficulty level.

The 5.11 Tactical brand was founded in 2003 (in California) by two gentlemen named Francisco Morales and Dan Costa.

Now, Mr. Costa was already holding 51% of Royal Robbin’s very own apparel brand since 1998, while Morales joined the company in 2002 – shortly before 5.11 Tactical came into existence.

Interestingly enough, 5.11 Tactical was born due to the success of the Royal Robbins 5.11 tactical pants that were the go-to tactical pants in the FBA Training Academy in Quantico (Virginia).

Apparently, sometime in the late 1990s, an FBI officer received the very same tactical pants as a gift and this sparked the interest in anything-5.11.

Nowadays, apart from designing gear and clothes for both men and women in the public safety community, 5.11 Tactical has also expanded into the fitness and outdoors markets.

According to an interview with co-founder Francisco Morales, most of the fabrics that 5.11 Tactical uses are produced in Asia (2).

That’s not surprising considering that most global companies out there rely on goods made in Asian countries like China, which doesn’t always translate into poor quality.

It all boils down to the parent company (the one who orders the goods) what their quality standards are.

Don’t forget that some of the biggest companies like Apple and Microsoft have manufacturing facilities in China. Now, it’s worth mentioning that 5.11 Tactical don’t actually make the rifles themselves – they are manufactured by JP Rifle’s and based on 5.11’s demanding specifications.

In fact, both companies work in cooperation for the 5.11 Always Be Ready edition rifle models that come with a custom laser-marking and a Cerakote finish.

And on top of the upgrades and typical rifle accessories, these rifles based on JP Rifle AR-15 carbine also offer a complete tactical rail package.

The connection between 5.11 and crossfit mainly stems from the fact that 5.11 Tactical was an official sponsor for the CrossFit Games Service Open during 2016-2020.

All of this explains 5.11 Tactical’s partnership with CrossFit as both companies have a strong presence within the military, fire and law enforcement communities.

Apart from that, 5.11 Tactical is also related to crossfit through their weighted vests that are used for improving your endurance, speed and agility.

Okay, give yourself a pat on your back because you now know the answer to the puzzling question – what does 5.11 mean?

It can mean either:

Although it’s safe to say that thanks to their extensive list of tactical pants, polo shirts, khaki shorts and all kinds of tactical equipment, 5.11 Tactical have definitely made the “5.11” term their own.